When you’ve been around as long as Mama Milano’s Pizza Bar in Chicago, there’s usually a reason. The Old Town landmark continues a family tradition that has been serving up its version of homestyle Italian pizza pie since 1919, but in its most recent incarnation as Mama Milano’s, has been turning heads even among the culinary literati. Chicago Magazine named Mama’s one of the city’s “Budget Bests” for 2012, and it’s that distinction and custom article mounting that lets the latest budget-conscious generation know they’re in the right place. 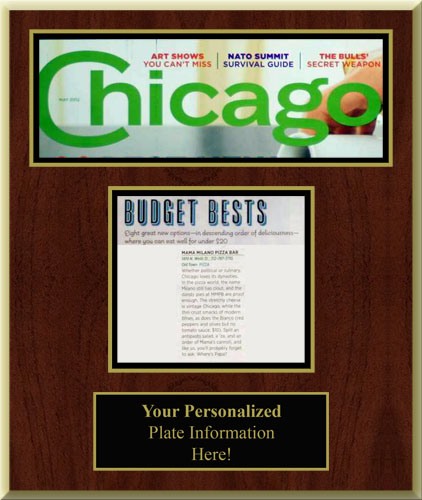 Comfort Food, Italian Style
The original Papa Milano emigrated to the United States from his native Italy in 1912. A century later, the Milano family has seen generations of original home-style Italian restaurants in dozens of styles. Mama Milano’s, however, returns the Italian pizzeria family to its roots while catering to patrons who savor authentic Italian cuisine and wines. It’s that very regression that earned Mama Milano’s plenty of critical acclaim in local Chicago print and online media, but it’s the menu prices that landed the family venture a spot among Chicago Magazine’s “Budget Bests” in May 2012.

The original Papa Milano is credited with bringing Italian home cooking to Chicago. As the father of Chicago-style pizza, Milano and the generations that came after him have been no strangers to food critics and changing times. Nowadays when money’s tight, it pays to have proof – in the form of a custom wall plaque – that the Milanos haven’t lost sight of their roots in rustic Italian comfort food that’s satisfying, affordable and timeless.

Why Custom Article Mounting Benefits Restaurant Ventures, New and Old
Mama Milano’s Pizza Bar is hard to categorize. The recipes have been around Chicago for a hundred years, but the Milano establishments have had different owners with different visions that catered to their own place in history. Mama Milano’s could very well be listed among gourmet pizzerias, back-alley pizza joints and Chicago’s hottest brunch spots. What works for a restaurant of many stripes, however, are positive reviews and great press. Whenever an eatery gets some coveted local ink, highlighting it within a permanent custom wall plaque lets patrons know that the establishment strives for acclaim and wants to show it off. A little bragging never hurt any business, especially when it’s well-deserved.

Whether it’s to highlight your own restaurant’s accomplishments, another business venture, or your personal achievements, a custom wall plaque will preserve it in style. See how great your newspaper or magazine article will look in a custom wall plaque from That’s Great News for FREE with a no-obligation online preview. Start now!