When Dwayne Hayes enlisted in the U.S. Air Force in 1983, it’s unlikely he did it with the hopes of becoming a millionaire as a result. But, as events turn, that’s exactly what happened. Hayes, now a service-disabled veteran, has taken his experiences and other factors obtained during his time of service and fully applied it in a business venture that is receiving some much needed accolade.

Exalt and the Catapult
Exalt Integrated Technologies, Inc. is centered on the goal of helping its clients achieve their organizational goals through the best information technology services available. Hayes gained the experience in IT that made for the foundation of his organization during his service in the Air Force. So, after 9 years of service, Hayes was able a number of years later, to parlay his experience, reputation and relationships that came as a result of his service and turn it into a lucrative business.

Now, Hayes and his team of 20 professionals are currently executing IT consulting and product contracts with federal government agencies, the U.S. Army, the U.S. Air Force, the U.S. Department of Agriculture, and the U.S. Department of Homeland Security. In a recent article, Hayes was quoted as saying: “I have been able to use contacts from my previous background in the Air Force and understanding how the military does business to start Exalt. I wanted to utilize resources that were there to enable our company to go from a start up to a more established company.” 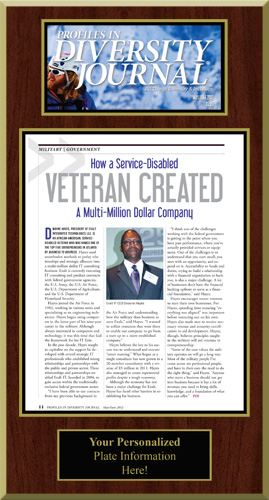 That’s Great News!
In addition to the many forms of recognition Hayes’ has received, he was recently honored by the Diversity Journal for not only the amazing mark he is leaving on the business world, but also for the fact he is a Black American disabled veteran. The article in the June issue of the magazine profiled Hayes, spoke of his beginnings, inspirations, challenges, and his philosophy. It was an uplifting article that Hayes would clearly want to preserve for a lifetime. That’s why he chose to preserve it in a custom article mount from That’s Great News.

You, too, can preserve your great news just like Hayes. See how great your article will look for FREE by clicking below and entering some quick info. We’ll send a FREE preview to your email inbox in 24-48 hours and there is absolutely no obligation to buy.