How to Write a Press Release: Make an Old Story News Again

Journalists look at press releases with great skepticism, and their first question if they even look at a press release is, “Who cares?” The next question is, “Is it current?” If you’re trying to promote media news coverage of a story that is more than a few days old, the key to landing a few inches of ink is making the story new again with a different spin.

Make it News With New News
Let’s say your company won a prestigious award that didn’t get more than a mention in the business blotter. This is when you need a related story to re-invent the original. If you won the award for being young and successful in business, sign your team up for a mud run and write a release about that, inviting the press to cover your team at the event. Include the award information in the context of your company being young, energetic and competitive, and you’ve re-created your entire image. (Plus, if you run the race in suits and ties, you’ll make a picture at the end that begs for full-color, above-the-fold, cover photo status.)

Watch the Calendar for Feature Events
The demographics of those involved in the story sometimes lend themselves to calendar events that will make the story feature-worthy once again. A young girl saved her best friend from drowning during a beach trip, and months later, her grandmother wanted to submit the story idea to a local paper. The best friends were high school seniors and cheerleaders, so just before the high school homecoming football game, the grandmother suggested a new angle on ho-hum homecoming coverage in the local paper. It was a dream-come-true tip for the reporter, who didn’t want to write another traditional “class reunion” story. Instead, he wrote a poignant story about best friends who had the opportunity to cheer their last homecoming together because of one’s heroism. The calendar can sometimes hand you those stories that practically write themselves.

There’s no victory quite like using your creativity to inspire those few, great moments of print coverage that highlight the best of your business or those you love. Celebrate that victory by preserving it for your own inspiration in a custom wall plaque, and you never know: looking at your very own media trophy could help you reinvent another old, long-forgotten story that’s worthy of its own trophy. 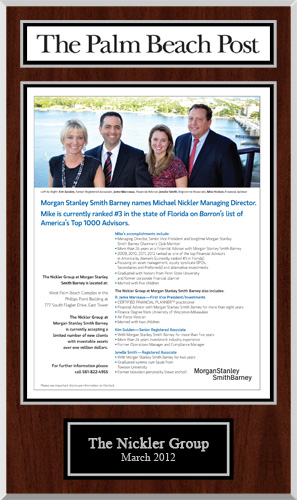 Have a press release in a newspaper or magazine? Preserve it today. Frame it in a custom article frame from That’s Great News and you’ll be able to carry on that news for years to come.

See how good it will look in a custom article frame today with a FREE, no-obligation online preview.

Why Employees Are Asking for Custom Article Frames for Christmas