One of the highest honors for someone who spends their time perfecting the art of barbecue is recognition in Southern Living Magazine. Helen Turner of Helen’s BBQ landed a coveted 2012 ‘Cue Awards Smokin’ Hot List designation, and she was sure to preserve it with one of the custom wall plaques that could handle the heat of her kitchen.

If You Can’t Stand the Heat, Stand In the Smoke
There’s plenty of heat and smoke in Turner’s line of work. For 17 years, she’s been the brains – and the brawn – behind her custom blend of hickory-smoked pork in Brownsville, TN. She said she takes it in stride when customers see her and ask to meet the pitmaster. It’s not every day you find a diminutive woman slinging pork shoulder in a small, smokey Tennessee shack. In fact, that – in addition to mouth-watering and well-known giant barbecued pork sandwiches – is what earned Turner a spot on the Southern Living list. Honored within a diverse group of ten barbecue chefs whose passion for quality grill fare is second only to their uniqueness in the field, Turner may have tears in her eyes. Whether they’re from the smoke or the award is another of her secrets.

A Good Review Cuts Through the Haze
While the clientele at Helen’s BBQ know from experience that Turner’s style of southern barbecue is the best around, it doesn’t hurt to welcome newcomers with one of the most sought-after positive reviews in the industry. The Southern Living article is now safely ensconced in a custom wall plaque at Helen’s. While the heat from her pits melted the ceiling fans meant to disperse the smoke, the plaque celebrating Turner’s claim to fame will remain a testament to her moment in the national barbecue spotlight. 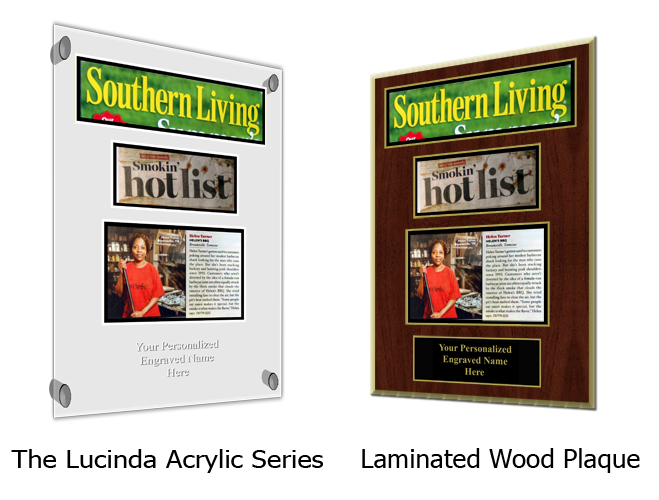 What accomplishment do you want to preserve? See how good it will look in a custom article mount from That’s Great News for FREE. Click below, provide us some details, and we’ll send you an online preview of how your article will look directly to your email inbox. There’s no obligation to buy, but just like Turner, we’re sure you’ll want to!

Five Reasons to Put a Custom Wall Plaque in Your Office