When Rich Lewis rented a Plant City, FL storefront for his shop, Angelic Tattoos, the city had a long-standing ordinance in place which prohibited tattoo shops. The minister had faith, however, and before long, city commissioners abolished the ban. The ensuing flood of ink-seeking clientele led to Angelic Tattoo being featured in the April 25 edition of the Tampa Tribune, and that ink earned a spot in a custom wall plaque on the wall at Angelic Tattoos as well.

Permanent Body Art as Life’s Work
The first day Angelic Tattoos opened its doors in the heart of Plant City, Lewis said he had six customers. It was just the beginning of a wave of people seeking permanent body art to immortalize their favorite art in ink, and Lewis said it was no surprise that the people of Plant City were ready for their very own tattoo shop. More than that, Lewis brought with him almost 40 years of experience in his craft, and even brought with him some of his devoted client base whose body art has Lewis’ signature design.

In the near future, Lewis said he plans to expand his shop to offer body piercing, but for now he said business is good. The studio features some product sales and fortune-telling services, and though it’s controversial for some within the community, Lewis said his focus as a nondenominational minister is on Christian-oriented body art.

Good Timing, Good Business, Good Media Coverage
Lewis demonstrated impeccable timing, opening his shop just after the city lifted the ban on tattoo shops in its downtown district. The press coverage he received was positive and great for business, and now serves as a testament to his business savvy for all Angelic Tattoos customers to see – custom article mounting as art. 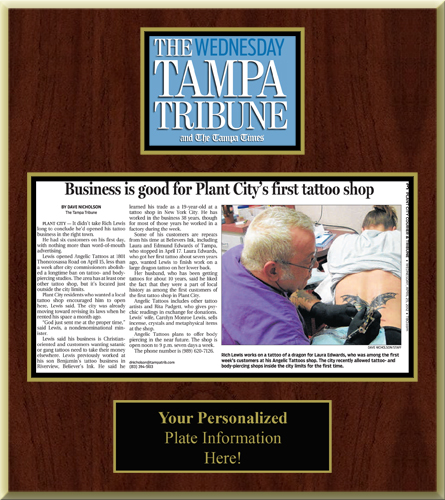 You, too can preserve your greatest accomplishments with a custom wall plaque from That’s Great News. And, if you click below, you can see how great your article will look for FREE with an online preview sent right to your email. There’s no obligation to purchase. Try it for FREE today.