The heyday of print newspapers may be history, but a changing marketplace doesn’t necessarily mean that newspapers are a thing of the past. More than half of American adults still read a daily newspaper, and while some of them are getting their news digitally, the vast majority still enjoy a physical newspaper to read when they wake up in the morning. Here are a few reasons you shouldn’t give up on local newspapers just yet. 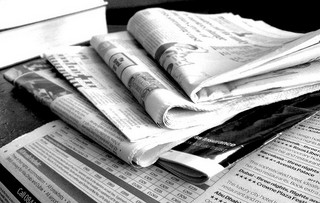 Many Americans get their news from online sources they would visit anyway, such as Google and Yahoo!. What these news sites can’t offer is local coverage. For your business, this means that local newspaper advertising and media coverage may still be reaching your target audience, your hometown consumer.

The changing face of a local newspaper audience may actually be a positive thing. Local newspapers have answered the siren song of the digital age by producing digital editions that can be read online and on e-readers, and even from smart phones. While these digital editions are attracting a new set of younger readers, an aging print media readership is quickly becoming more affluent than those who consume their news through digital media.

Digital editions do a lot to serve a mobile audience, but as with any form of media struggling to keep our attract readers, content is king. A single feature story may exist in several forms at the same time. The print and subscription digital versions of the newspaper will contain a story in its entirety, while truncated versions of the same story are sent out through social media such as Twitter, Facebook, Pinterest and similar sites that target a younger audience. The key is to lure readers to one of the full versions, thereby exposing them to associated advertising. Today’s readers love interaction with their peers, so many news outlets will invite debate and administer online opinion polls to get readers involved in key local stories.

Much of the hype about the death of the newspaper is just that: hype. We may be seeing a significant change in the way newspapers are run and how they develop content, but the demand for print newspapers hasn’t changed much over the past few years. The moral is, don’t give up on your local paper. Foster a relationship with its editorial staff, as well as its advertising staff, and work with them to create great content that local readers will appreciate. Then, frame that story that features your business with newspaper article framing, and display a sense of pride in your city that your patrons can enjoy for years to come.

Get a glimpse of how good your content will look in a custom article frame with a FREE, no-obligation online preview.